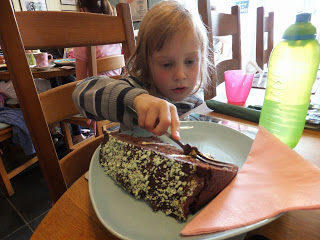 Our daughter enjoying chocolate cake last year that WAS gluten-free!

I am not sure why I am telling you about this…I guess because I want you to know that having a child with coeliac disease is not easy and that even when you think you have got the hang of it things can still go wrong!

A few weeks ago I wrote about our mistake with Tesco ketchup (or was it Tesco not warning of a new recipe…they have ignored my contact with them so I will never know!).

This time I know it really was our mistake, pretty much four years to the day that we learnt about her diagnosis.

We had a lovely long weekend, travelling up to North Devon to stay in a cheap chalet…a little break away for all of us to keep the kids going until the summer holidays.

Being near to Westward Ho! we had to make a trip to renowned cafe, Tea on the Green with its enormous cakes and huge portions!  Although they don’t advertise it (I still don’t understand why), most of their cakes are gluten-free and having discovered it last year (read about that here) we had to return.

After an enormous lunch of jacket potato and salad, we returned later in the afternoon to sample some cake!  We asked which ones were gluten-free and then for some reason my daughter asked for the carrot cake…being at the top of the cabinet with the other cakes that they had listed as gluten-free, we ordered it (please note that I have since asked the cafe to keep all of their gluten-free cakes at the top of the cabinet to avoid cross-contamination).

In the back of my mind I was running over which ones they had mentioned…and I couldn’t quite remember that one coming up.  Anyway, it was busy, my son was itching to get to the park, so I went on outside whilst my husband made the purchase.

Even while I was eating it with her I had a niggling doubt about its gluten-free status.

Later that evening, after coming out of the shower, the poor little thing said she had tummy ache.  It is unlike our daughter to make a fuss about anything so when she said that she wanted to go back to the chalet rather than play our first ever game of bingo (!!!!), I knew something was wrong.

Half an hour later the contents of her stomach had been emptied…including the cake…and she claimed to feel much better.  She fell asleep quickly and apart from complaining she had tummy ache at one point the following evening she has seemed fine.  Now I wait with dread for the anger…which we have always previously equated to her possibly being glutened (perhaps she just has issues with anger!).

I only found out for sure today that the cake was the cause of the sickness and I have to say that I feel terrible.  Having to care for a child with coeliac disease, or indeed any condition, brings a big weight of responsibility with it.  If you make yourself ill that is one thing, but making your child ill is truly awful.

Have you ever accidentally given your child something that you shouldn’t have and made them ill?  Make me feel better by sharing your story!

I shared this with Honest Mum’s blog link up: