At the weekend one of my good friends from university got married which meant a great excuse for a weekend without the kids (thanks to my very lovely mum and step dad!).

Mainly because they weren’t invited!

Anyway, after being’ thrown’ out of our hotel on the Sunday morning…I could have stayed in bed all day…we went on a little explore.

Being in the New Forest we thought it would be rather rude not to have a little look around before heading home.

It was also the perfect excuse to check out a few cafes and restaurants to see if they had any gluten-free food (just in case we decide to go camping there next year with the kids).

We headed to Lyndhurst, a pretty little town about 30 minutes drive from Ringwood and about 15 minutes from where the wedding had taken place.

After walking around for about 5 minutes we had already spotted 3 places that provided gluten-free food.

We didn’t go inside so I cannot provide any further information than that.

The second one we came across was called Tea Total.

Now if you like tea and you are on a gluten-free diet then this is the place for you.

They must have had at least 50 different teas from around the world (see the list below!) and these were brought to the customer in a special ‘tea pot’ along with a timer with the correct time programmed in to steep the tea.

This place is for serious tea fans.

Of which, I hasten to add, we are not. 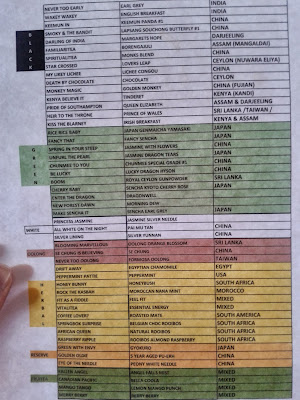 However, we are fans of places that can cater for gluten-free diets (and dairy-free ideally) and this place could definitely do that as you can see from the menu below (if you squint…sorry!). 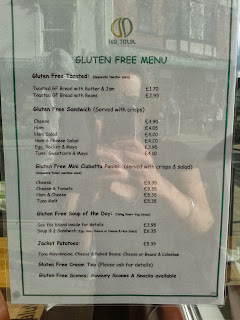 I had a huge jacket potato with cheese and coleslaw which was beautifully baked and served with a lovely salad. 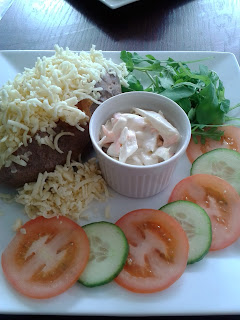 My husband had the gluten-free panini with cheese and ham.

This was served with salad and crisps.

Now, it was the crisps that concerned me a little, so we asked a few questions of the owner…just to make sure they were actually gluten-free. 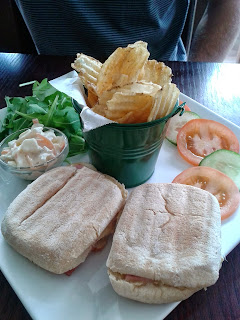 He told us that they were Kirkland crisps, bought at Costco and only contained oil and salt.

He seemed slightly confused about coeliac disease and kept mentioning lactose intolerance…so just in case he reads this…coeliac disease is an autoimmune disease that necessitates the removal of gluten from the diet.

It has nothing to do with needing to avoid lactose, although some coeliacs, early in their diagnosis, need to avoid lactose as they are temporarily lactose intolerant (sorry to all of those who know this already!)

Anyway, I have done some extensive research about Kirkland crisps and cannot find a definitive answer as to whether they are gluten-free (ie, free from traces of gluten which is what coeliacs require) or not…so I guess if in doubt I would avoid them.

My advice to Tea Total would be to buy crisps that are definitely suitable for coeliacs…such as Burts Crisps or Seabrooks, or even own brand supermarket ones that are listed in the Coeliac UK Food and Drink Directory.

It is a shame not to do that because on the menu they even stated that they used a separate toaster for the gluten-free toast, a separate panini press for the paninis, and used Knorr stock cubes in their soup (which are actually lactose free too).

To go to this much trouble to cater for coeliacs, it seemed a shame to be let down by the crisps!

All in all, I was impressed by this little ‘find’!

So much so that we rather over-stayed our welcome in the car-park and didn’t have time to get information about the other cafe that we had spotted that said it could cater gluten-free.

So, if you live in the area, please do some research for us and leave a comment to tell everyone the name of the final place that can cater for coeliacs in Lyndhurst!