So the results are finally in. My full Symprove review is here. It took me longer than 12 weeks to complete the programme and I’ll explain more about that below.

This post contains Affiliate links. As an Amazon Associate I earn from qualifying purchases. All images from Symprove. 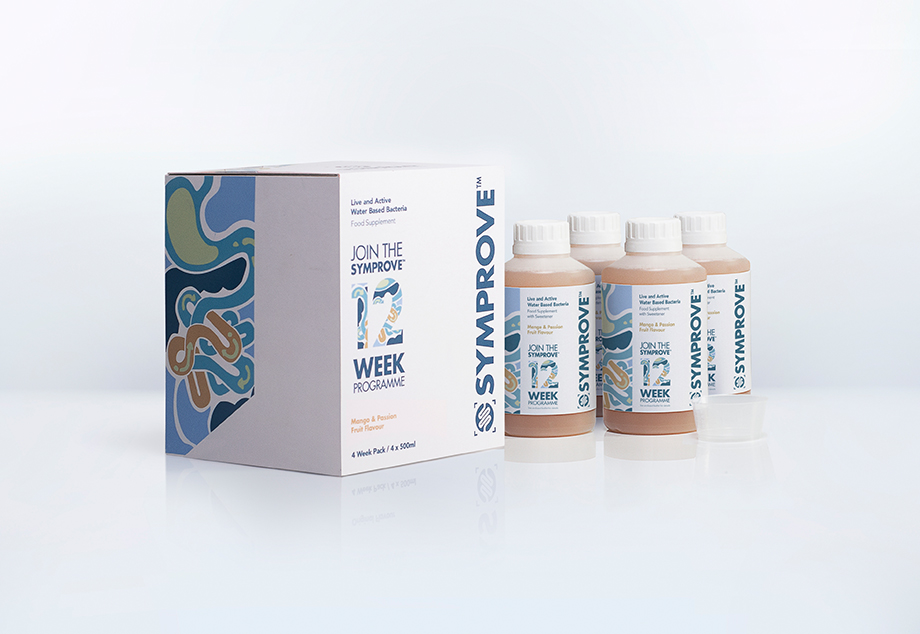 Are you sitting comfortably?  With a cup of tea or coffee?  For the 12 Weeks of Symprove may take longer than the 12 Days of Christmas!

Many of you will know if you have been following my blog, that back in February I suffered from a large IBS (Irritable Bowel Syndrome) flare up.

What is IBS (Irritable Bowel Syndrome)?

IBS is something you hear about a lot, and many of you could suffer from since it is suggested that a third of people suffer with it in the UK at some point in their lives. It affects more women than men and often presents first in young adults and teenagers.

That was certainly the case for me.  When I was in my late teens I started to be affected.

I had severe bloating, so much so that I was often unable to eat as my tummy felt so full.  The situation became a lot worse in my early twenties when travelling around South America where my diet for six months was very reliant on wheat-based products (I was vegetarian).

Upon returning from the trip I was tested for coeliac disease as I had worked out by then that wheat caused most of my symptoms.

The test came back negative and was followed by a biopsy, which was also negative.  In hindsight I wonder if I had been eating enough gluten for it to show positive.

Regardless, I removed wheat from my diet and my symptoms got considerably better.

When I was pregnant my symptoms disappeared and I was able to eat wheat again.

It was only a year after the birth of Pickle that I started having problems with it again, and since that coincided with Roo being diagnosed with coeliac disease, I cut gluten out of my diet once more.

In February I started to take milk kefir since I had been spending a lot of money on Biokult probiotics to try and re-balance my gut bacteria having read this could help with IBS.

In the past whenever I tried probiotics they made my symptoms so much worse that I had to stop.  After taking probiotics for about a year and my tummy not objecting, I decided that making my own in the form of milk kefir would be a great idea!

In hindsight it was the worst idea ever! It set off a bad attack of IBS where my tummy was incredibly bloated, I couldn’t go to the toilet and I felt dreadful.

At that point I decided that enough was enough and I could ignore my symptoms no longer.

In addition to the IBS I was suffering with thrush on a regular basis, lethargy, brain fog, terrible eczema on my hands and thought that there must be some imbalance of bacteria and yeasts causing all of this.

I put myself through the incredibly strict SCD diet (SCD stands for specific carbohydrate diet and involves cutting out most carbohydrates and sugars) and when that didn’t help, the more prescriptive GAPS diet.  You can find out more about them by clicking on the links.

In my view these diets did help to eliminate any ‘bad’ bacteria and yeasts that I had (the idea is that you starve the bad bacteria by avoiding certain carbohydrates and sugar) and they also helped to settle down the hormone issues that I was experiencing.

After four months I relaxed the diet and these days I avoid most carbohydrates and try to limit my sugar intake (particularly refined sugar which causes me headaches and lethargy)…which isn’t always successful!

Symprove is a water-based probiotic that is proven to reach the intestines and colonise there (unlike other probiotics) during the suggested 12 week ‘course’.

You can watch a short clip of the independent Kings College research results being presented below.

Interestingly a number of NHS consultants are starting to suggest taking this to their patients suffering from IBD (Inflammatory Bowel Disease) or IBS.  I met one such patient at the hairdressers last week, whose symptoms had almost disappeared since taking her 12 weeks of Symprove.

I started taking a reduced dose of 15ml (rather than the full suggested dose of 65ml) in mid April. In mid July I felt ready to start the full dose, having gradually built up to it by increasing the dose by 5ml every few weeks.  I waited for any symptoms to subside (I found my eczema flared up and I became constipated every time I upped the dose) before upping the dose each time.

As a customer of Symprove I was invited to a private Facebook group where people could share their experiences. It was, and remains, a source of inspiration and support.

In the early days, when I felt skeptical and fed up, it was very reassuring to read others’ positive experiences.  It kept me going to know that people were improving through the intake of these probiotics.

Some stories made me wonder if they were being paid to post positive things…but that is not the case.  Every person there is genuine and has suffered with health issues related to the gut.

At the point of starting the full dose I had some stool test results back that showed I was deficient in a number of ‘good’ bacteria, which also happened to be in Symprove.

That spurred me on to bite the bullet and take the full dose.  Within a few weeks of taking the probiotic my constipation eased and I started to feel a lot better.

I can’t really describe it.  My tummy was still bloated at times, but my ‘head’ felt better and I felt ‘well’ again.  Not that I had felt particularly unwell, just that I felt not well, if that makes sense?

Now I feel like I am firing on all cylinders at all times!  But, I won’t lie.  My tummy is still uber sensitive and doesn’t like me veering off my pretty strict diet.

I continue to take a half dose of Symprove, and will do so for at least 3 further months to ensure that my gut bacteria remain balanced.  From everything I have read, if you have an unbalanced gut flora then you can never quite get it back into balance without the use of probiotics or probiotic foods (which having lived on through the SCD and GAPS diets I can no longer stand!).

I am still avoiding dairy, eggs and various nuts that the York Test showed me to be intolerant to and I have noticed that the dreadful eczema on my hands has almost entirely disappeared, unless I eat any dairy.  I am slowly concluding that dairy is what causes my eczema.

With regards my bloating, if it continues my next experiment will be with the low FODMAP diet. Hopefully by then I will be able to eat eggs and nuts, even if I find that dairy still doesn’t agree with me. That will make things a lot easier!

I would love to hear from you if you suffer from similar health issues or if you have any questions about Symprove.

I have not been paid to write about it but I have been given the probiotics to try and I wanted to share my honest experience of them.  Discussing such health issues can be tricky but if it makes it more ‘normal’ and ‘acceptable’ in society then I am happy to share my problems!

If you’re interested in trying Symprove and you buy it through any of the links (or this one) on this page, you will pay the same price but I will get paid some commission by Amazon for referring you. That helps me to continue running this website which helps people like you who have digestive issues and often restrictions to their diets.

Pin my Symprove review in Pinterest so you don’t lose it: 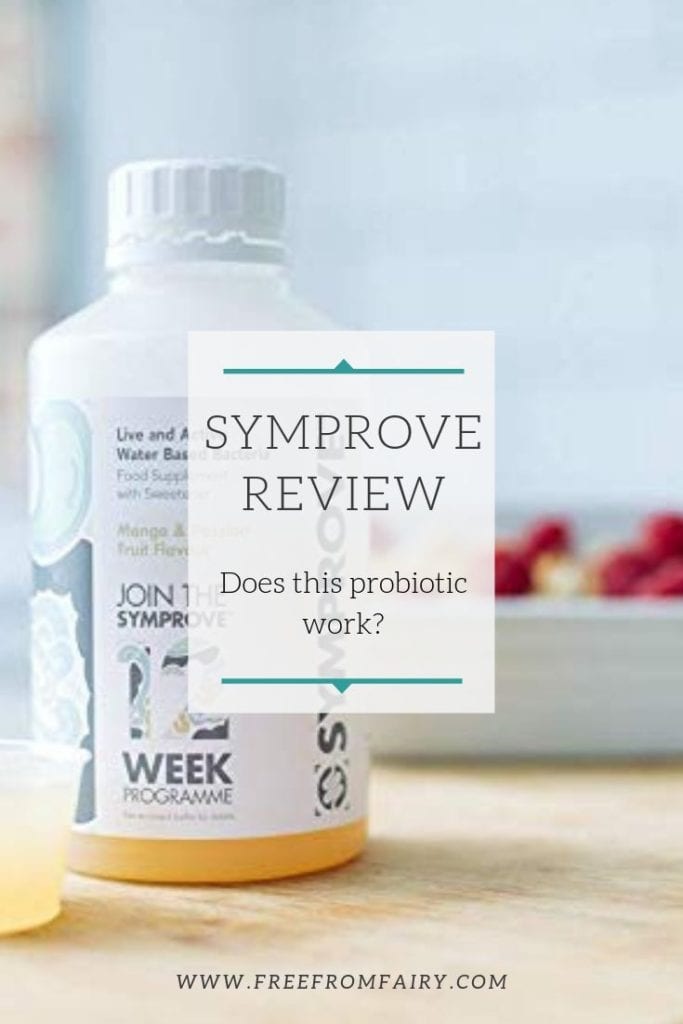