I adore flapjacks and I know you do too so I thought I’d create another healthy recipe without all the syrup that you find in ‘traditional’ flapjack recipes. They are suitable for anyone on a gluten free and/or refined sugar free diet. They are perfect for anyone with coeliac disease and can be adapted for those following a vegan diet too.

I’m a huge fan of flapjacks but I know that, despite their reputation as being ‘healthy’ they rarely are due to the large amounts of syrup in them. I’ve therefore created this recipe with no refined sugar and definitely no syrup.

Instead of syrup I’ve used a little honey along with dates to make a paste that binds the oats and flour together.

They sound lovely but aren’t they complicated to make?

Unlike other recipes that have a crumble or ‘streusel’ topping that has to be made in addition to the base, my recipe is made all-in-one.

The base flapjack uses the same mixture at the crumble topping so in effect the layer of apple is sandwiched between two flapjack layers.

Whilst you’re making the flapjack layers the apple can be cooking so that it takes very little time to assemble the flapjacks ready for baking.

So what equipment will I need?

You’re going to need the following to make this recipe:

Why do you use flour in these flapjacks?

I decided to create a recipe that was a bit more cakey than a traditional flapjack. Since I love apple crumble and wanted to combine the idea of a crumble with a flapjack.

The advantage of my flour blend is that it is a wholegrain blend that contains no rice. All other gluten free flour blends are made from predominantly white refined starches that include rice flour.

Of course there is nothing inherently wrong with that except that white refined starches contain no nutritional qualities. The benefits of wholegrain’s are well-known which is why I created a blend based upon naturally gluten free flours.

If you’d like to know why I didn’t include rice flour in my blend then check out my article, arsenic in gluten free food.

Can I use eating apples? I can’t get cooking apples.

Yes you can use eating apples if you don’t have cooking apples.

The main differences between cooking and eating apples is that the latter cook down into a puree and are more sour.

If you’re using eating apples you’ll need to cook them for longer than the recipe states and with less water.

In my experience four sliced eating apples will require approx. 65ml water. They need to be simmered with the lid on for approx. 10 minutes before lifting the lid off and boiling for around 5 minutes. By this time the apple pieces should be soft and there should be no liquid left.

Can I use pre-prepared apple puree for these apple crumble flapjacks?

Yes! In fact if you’re short of time that would be the perfect solution. You’ll need around 500g apple puree for the recipe.

If I was using apple puree I would still add the ground cinnamon and raisins/cranberries before topping with the crumble.

How do I store them?

Once fully cooled you can store these honey flapjacks in an airtight container for up to 5 days at room temperature.

Get my free recipe book! 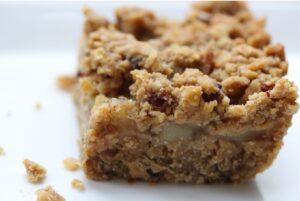 For the flapjack and crumble layer

For the apple layer:

Nutrition facts for information only.