These gluten free mince pies are the best you’ll ever taste. The gluten free shortcrust pastry is short and buttery; the pear and amaretto mincemeat goes beautifully with the almond frangipane topping. If you are dairy free there is a dairy free option too.

It’s taken eight years to post a mince pie recipe but it’s here and it was worth the wait!

What is a mince pie?

If you’re not from the UK then you may be wondering what on earth this little Christmas treat is. You’d even be forgiven for imagining that it’s a savoury pie filled with minced meat.

What it actually is, is a pie typically made with shortcrust pastry, filled with a sweet fruity filling.

It’s the perfect little treat at Christmas, or indeed any time of year. In fact I developed a nectarine, summer berry and amaretto mince pie made with summer fruits some years ago.

How do you make gluten free mince pies?

Well they are actually easier than you might think.

I know lots of people are scared of making gluten free pastry but it really needn’t be something to fear.

I also teach how to make rough puff pastry in some of my online cookery courses.

The simplest way to make pastry is in a food processor. It isn’t essential but it makes it very quick and easy.

Once you’ve made the shortcrust pastry and lined a tart tin it’s time to fill the pies with mincemeat.

I make my own mincemeat, it’s super easy and tastes so much better than the shop bought stuff. However, feel free to buy it. I mean doing what you want is the best way in life.

The one that tastes best with the almond frangipane topping is this gluten free vegan mincemeat with pear and amaretto.

So onto the final part of these mince pies.

Of course you can just have a pastry top or a pastry star. Alternatively you could have crumble topped mince pies by using the crumble from my gluten free apple crumble.

However, for me, frangipane topped mince pies are the best.

I find using a handheld electric whisk the easiest way to make these but you can just use a wooden spoon and ‘elbow grease’!

Can you make these gluten free mince pies vegan too?

Yes, it is possible to make these mince pies suitable for those on a vegan diet.

All of my mincemeat recipes are vegan. They use coconut oil as the fat, rather than suet which is traditionally used.

However, rather than using a frangipane top to make them vegan you’ll need to choose either a pastry top, or preferably, the crumble top. When making my pastry vegan it is less easy to handle which is why I recommend using the crumble topping.

Check out my other tips below…

So here are my tips for making sure you get perfect mince pies every time:

What to serve with mince pies

I personally like to serve my mince pies with brandy butter.

It’s super easy to make. I don’t have a recipe but I just follow Mary Berry’s recipe.

Alternatively you could serve with brandy cream, double cream, clotted cream, ice cream or any other naughty but nice sauce.

If your vegan you’ll want to serve with a vegan ice cream or how about trying out Rebecca from Glutarama’s vegan clotted cream?

How do you store them?

The simple answer is I don’t!

Whenever I make these they disappear in a matter of hours so I’ve no need to store them.

However, they freeze very well. Just allow them to cool completely before popping them in a bag in the freezer.

Alternatively you can store them at room temperature in an airtight box for at least 5 days.

If you make the recipe I’d love to see it. Just tag me @freefromfairy across social media for a well deserved clap.

If you like this recipe get my free recipe e-book:

You’ll want to save this recipe; it’s a good one… 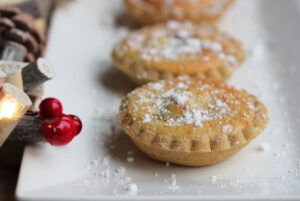 To make the pastry:

To make the frangipane:

To finish the mince pies: