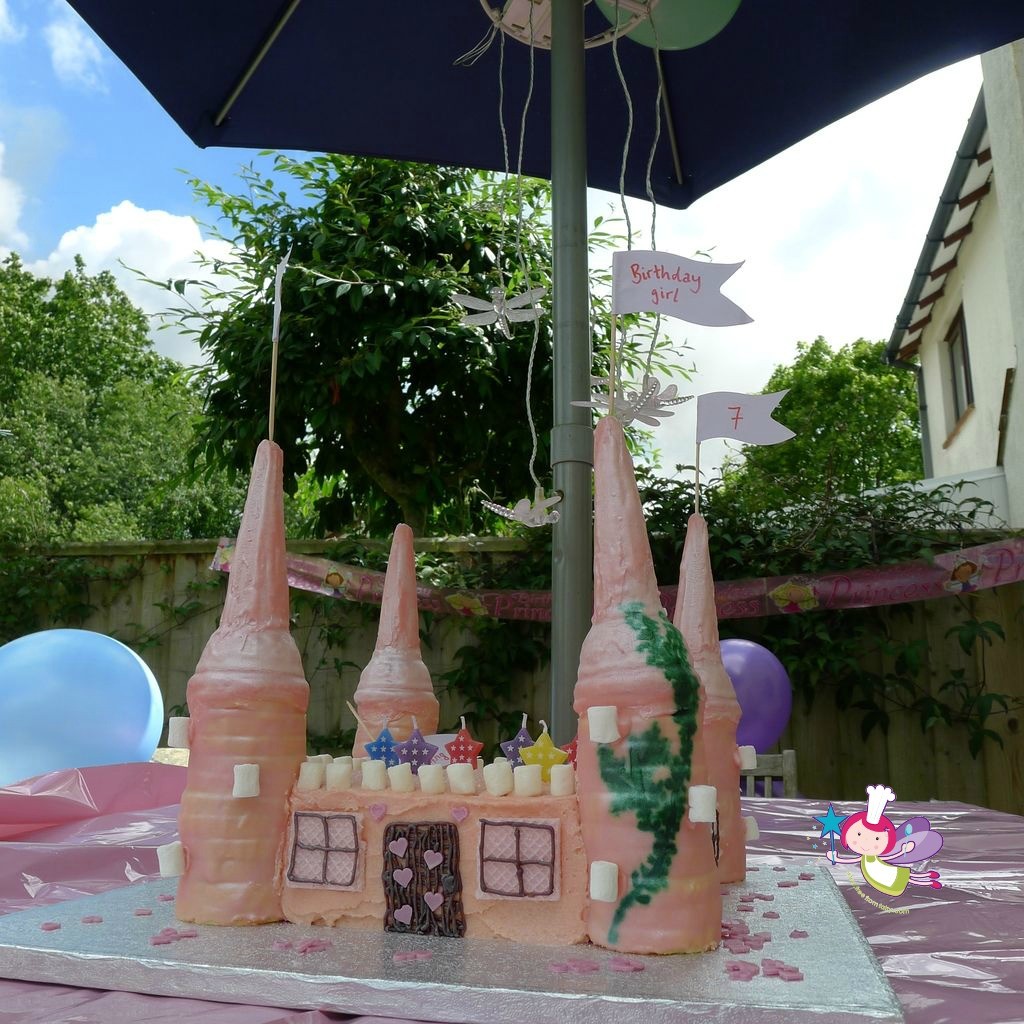 My little girl is getting bigger!  She turns 7 a week today, but we had to have her birthday party yesterday because we will be camping next week!

I am feeling pretty exhausted after two parties in two weeks so will keep this short!

I got the idea for this cake from Mum on the Brink.

My daughter requested a castle cake so I frantically started looking on Pinterest for something simple that wouldn’t be too taxing for me (being an amateur cake decorator!).

The instructions from Mum on the Brink are brilliant and I copied her idea of using a stack of biscuits to make the towers, but I made my biscuits.

I used my trusty recipe for jammie dodgers again, but this time cut them out exactly the same size as the Barkat ice cream cones that I had bought for the spires.

I ‘glued’ them together using the icing from my iced gems.

Rather than cover the biscuits in butter icing, I opted to use the icing from my gluten free iced gems recipe.

This sets hard and meant that the biscuits were not wasted by going soggy.

It also meant that I could do this step a few days in advance making the whole cake a lot easier to put together.

I kept the stacks of biscuits covered in icing in my oven (since it is so hot I haven’t been using it and it meant that the biscuits were not seen!), along with the iced ice cream cones, ‘stuck’ to the stack of biscuits with the same icing.

I baked my cake using my basic sponge recipe and made it vanilla as requested.

I did a double quantity of the mix and baked it in a square pan.

In hindsight I would have made it in a smaller tin but I didn’t have one! 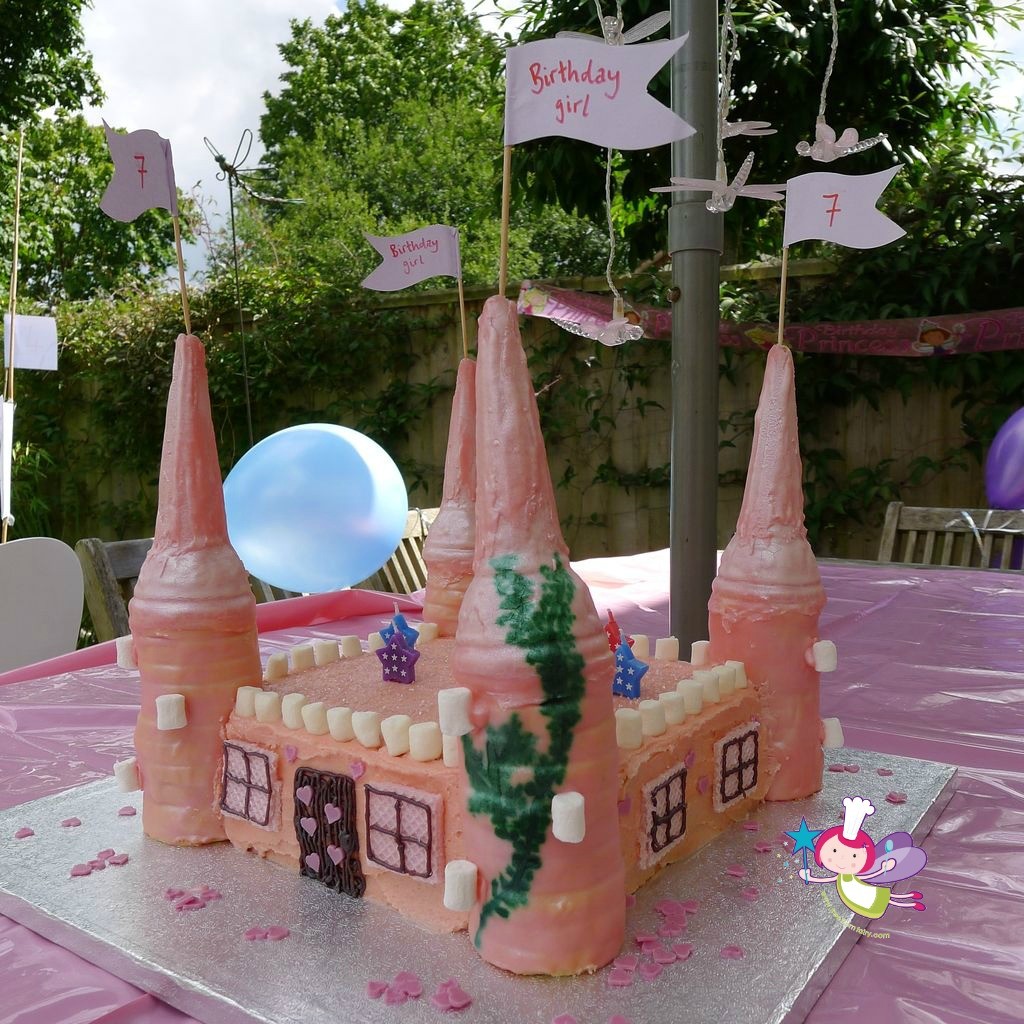 When cool, I sliced the cake in half and filled it with homemade jam.

I then used my ‘butter icing recipe’ that you can find here, to cover the cake…tinted with some red gel colouring.

I used mini-marshmallows for the little windows.

The door was made from squirty chocolate icing that I had knocking around in the cupboard, and the big windows were made with Pink Panther pink wafers.

I painted a ‘plant’ on one tower with gel food colouring!

Finally I used Dr Oetker silver shimmer spray to give it some shine!

I had one very grateful and happy little girl and a super easy cake to make! 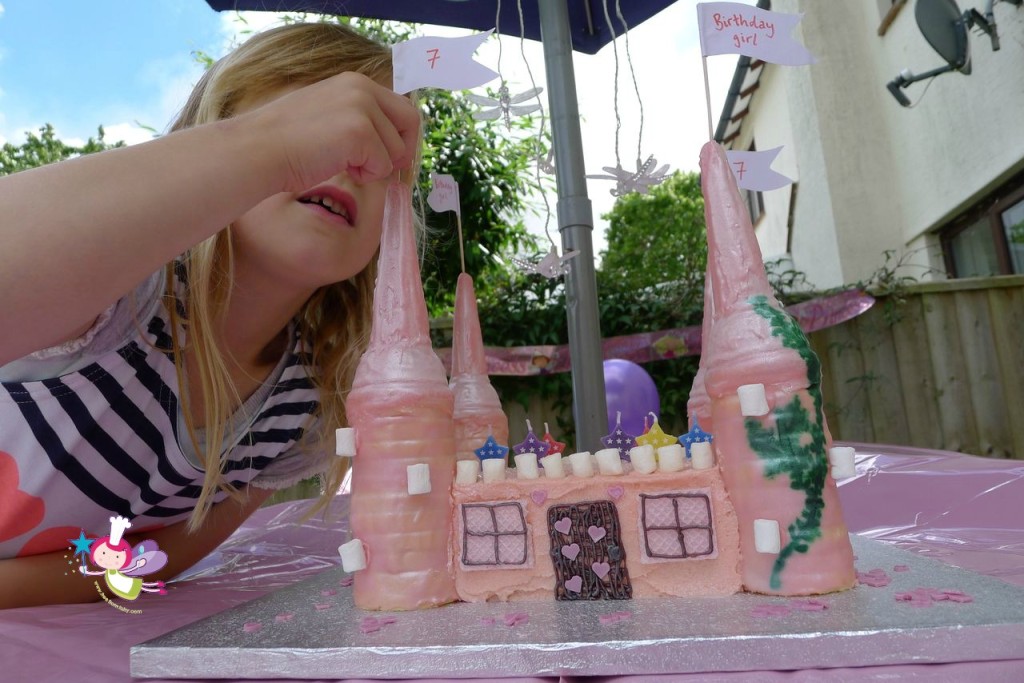