I created this recipe for low carb, paleo pumpkin pie while I was following the SCD and GAPS diet. I had to avoid carbs and dairy along with refined sugars so this was the solution. The base is an almond crust and the topping is based on coconut milk; although you’d never know from the taste!

Because here in the UK it can be hard to get pumpkin puree I made my recipe with butternut squash.

With a wet weekend coming up what better way to spend it than using up the pumpkin you have left over from Halloween?

Or, if like me, you have no pumpkin left, then how about using butternut squash instead? I find that much easier to get hold off and much easier to work with too.

This coconut based pumpkin pie contains no grains (thus no gluten), no dairy and no refined sugar so it really is a treat that you can indulge in. Especially if you are following a low carb, paleo, GAPS or SCD diet.

And if you are worried about the taste of coconut, don’t be because even my coconut hating husband loved it.

What is a low carb pie crust?

Normally a pie crust is made from pastry that consists of flour and butter (or shortening) along with water.

I discovered some years ago that to make a successful gluten free pie crust an egg is required to bind the gluten free flour with the butter or shortening.

If you’d like to make a gluten free pie crust rather than this low carb one then you’ll find my never fail gluten free (dairy free) shortcrust pastry recipe here.

However for this recipe I’ve chosen to make a very simple low carb pie crust that is suitable for anyone following a paleo, GAPS, SCD or Keto diet. If you are following a Keto diet you’ll need to follow my instructions below to adapt it.

To make the crust all you have to do is combine the ground almonds with the melted coconut oil, honey and egg.

It can be tricky to make into a crust so I highly recommend dividing the mixture into four pieces and pressing those into your pie dish until they all join up into one. Make sure there are no gaps or the filling will leak!

In order to make this pumpkin pie recipe it’s easiest if you have some specific equipment. However if you don’t have this equipment don’t despair as I have some alternatives for you.

Ideally you’ll use a good food processor or high powered blender to make both the crust and the filling.

If your blender is not powerful enough you may end up with a filling that isn’t quite a smooth as it should be. In that case, if you can get hold of pumpkin puree, then use that and you won’t need the blender (see below question).

Can I make this paleo pumpkin pie suitable for the keto diet?


If you are following a keto diet then you won’t be able to use the honey in this recipe.

I recommend that you substitute honey for a sweetener such as stevia. The amount you require will be dependant on how sweet you like your desserts. I suggest adding a little and tasting before you bake.

In order to adapt the pie crust you may need to add a little water to bind the ingredients together to make up for the lack of liquid honey.

To adapt the filling you can just add stevia instead of honey and taste for your desired sweetness before baking.

Can this pumpkin pie be made with dairy?


If you don’t need to avoid dairy then there are a few substitutions you can make:

1) Replace the coconut oil in the pie crust with melted butter.

Can I make a standard gluten free pie crust, rather than this low carb one?

In the text above this section I link to my never-fail gluten free shortcrust pastry recipe but you’ll also find that here. If you want to make that dairy free there is an option for that.

Can I use tinned pumpkin puree?


Yes you can. Here in the UK it is often hard to find which is why I’ve chosen to make my own puree with butternut squash (which is very similar to pumpkin but easier to find all year round).

Just replace the butternut squash with the same weight of pumpkin puree.

As always please do let me know if you make it. It makes my day to have your feedback (good or bad because then I can improve!).

And do share any photos you have on your favourite social media channel tagging with #freefromfairy.

Pin the recipe so you don’t lose it: 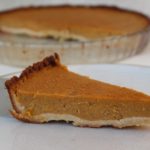 For the almond crust:

Nutrition facts for guidance only.