This gluten free vegan mincemeat is my all time favourite recipe. It is made with coconut oil instead of suet so is suitable for vegetarians and vegans as well as those following a gluten free and/or dairy free diet.

Once you’ve made it you’ll never buy it again!

Mincemeat is a traditional filling for mince pies. It is usually made with dried fruit, spices, spirits and beef suet.

As suet is made from animal fat that is often coated with flour it is normally unsuitable for vegetarians, vegans and people with coeliac disease or avoiding gluten.

Some years ago I came up with an alternative recipe that is perfect for anyone following a gluten free, dairy free, egg free, vegetarian or vegan diet.

Not only that, but being made with coconut oil it doesn’t have any of the processed vegetable fats that are often used in vegetarian or vegan mincemeat.

I always try to eat a diet of unprocessed food as far as possible hence my use of coconut oil rather than a vegetable shortening. If you’d like to read why eating processed food is best avoided read this article.

Why make your own mincemeat?

Making mincemeat is super, super easy and the end result is so much tastier than the shop bought stuff.

Of course the other benefit to making your own mincemeat is that you know what goes in it.

Take a look at the ingredients in a shop bought jar and you might be shocked to see all kinds of strange things.

Glucose Fructose Syrup (High Fructose Corn Syrup) is commonly added to the cheaper varieties. Whilst there is no conclusive evidence that this leads to higher levels of obesity I think I’d rather avoid it!

Is it easy to make vegan mincemeat?

Yes in a word.

Until a few years ago I had never made it; now I never wouldn’t make it.

Simply melt the coconut oil and sugar together then add all the other ingredients (except the alcohol, if using it) and simmer them for 30 minutes or so.

Tada. Mincemeat ready for storing in the fridge until required. What’s not to love?

Other recipes for mincemeat

Recipes that use mincemeat

I adore mincemeat so I have a lot of recipes that use it. Of course you can make traditional mince pies but you can do so much more than that with it too.

So if you have a jar of mincemeat left after Christmas why not try some of these recipes out: 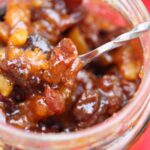 A wonderful easy to make vegan mincemeat that is suitable for those on a gluten free diet due to coeliac disease or other medical/lifestyle reason.

Nutrition information for guidance only

* to sterilise your jars and lids (I just collect up old jars from peanut butter etc) wash with warm soapy water, rinse well and dry with a clean tea towel.  Then place on a baking tray in a pre-heated oven at 180 degrees for 5 minutes.